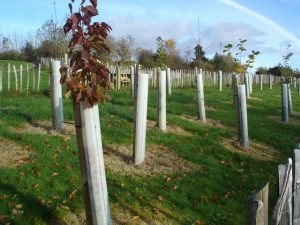 A significant increase in tree planting is needed in the UK quickly if other targets to cut carbon are not met, according to the Committee on Climate Change (CCC)

The government adviser has recommended that at least 30,000 hectares (Ha) of woodland must be planted annually until 2050, which is more than double the rate planted last year. They stress that if other carbon reduction targets are not met then this figure may have to rise to 50,000 Ha per year. This equates to an increase from 13% to 17% of land in the UK.

The Woodland Trust has also said this would be equivalent to about 1.5 billion new trees and were a necessity so that future generations would not be “let down” by poorer air quality and rising “urban heat”. These targets form part of the Government’s wider commitment to the CCC goal of the UK cutting all greenhouse gas emissions to net zero by 2050.

There are a number of issues that lie ahead in the balanced delivery of tree cover against these targets. It takes time for trees to grow and absorb carbon. There are many high upfront costs to planting trees and there is a clear need for an economic incentive for this to happen.

And of those numbers in England, more than a quarter were planted in just five areas – Northumberland, Stratford-upon-Avon, Eden, Carlisle and County Durham.

So this can hardly be described as a balanced and uniform approach to tree planting.

There are clearly some planning constraint and land availability issues that limit the conversion of plots to woodland. During a period of steep capital growth, there has been an understandable preference to maximise rural property assets or to set aside land for residential development to meet local housing need.

However, over the same period, there has been a growing urgency to respond to climate change and to mitigate the emissions that are accelerating it.

The central issue is incentivising farmers to meet this challenge by setting aside land for tree planting.  While planting has increased in the past four years, the last time the UK planted 30,000 Ha of trees in one year was in 1989, as the timber industry pushed to increase the country’s lumber supply.

With Brexit and the threat of a no deal potentially impacting on animal farming in particular, it could be argued that the Government should be looking at accelerating support for new sources of income to mitigate risks to their core business.

Landowners in England can apply for up to £6,800 of funding per Ha of land for planting projects and another scheme providing £10m for 130,000 “urban trees” in towns and cities has also been announced.

The Department for the Environment, Food and Rural Affairs (Defra) has also reduced said the minimum planting site size from 30 Ha to 10 Ha to encourage people with smaller plots of land to join up.

There are separate schemes for land in Scotland, Wales and Northern Ireland.

Earlier this year, the Government announced the Urban Tree Challenge Fund, offering grants worth £10m over 2 years to plant over 130,000 trees in England’s towns and cities. The scheme is administered by the Forestry Commission and is open to individuals, Local Authorities, charities and NGOs.

Defra has defended the scheme so far, by stating that cities that had received no funding, including Liverpool, Bristol, Croydon and Leicester – were “major metropolitan areas” with “little land available for planting”.

But it can be argued that in spite of space constraints, trees and hedging of any number have been proven to significantly reduce localised levels of traffic pollution. This in turn reduces respiratory illness and other health issues with local residents, as well as reducing the “urban heat island effect”. Trees easily absorb heat from buildings and roads through the day and release it steadily at night.

Tree planting also has wider climate change mitigation benefits, especially in upland catchments to slow the flow of surface flooding. Planting alongside upland riverbanks helps retain soil cover, encourage biomass and absorbs surface water before it is transmitted to rivers and down to more populated areas. This in turn reduces the threat of flooding in communities.

Defra has said that since 2010 over 15 million trees have been planted [in England] and that this “is a clear commitment through our 25-year Environment Plan to grow woodland cover further.”

They plan to consult on an “English tree strategy” which would set out how it would “rapidly grow forest cover”.

Officials in Northern Ireland say they want to increase the country’s forest areas from 8% of land to 12% by the middle of the century.

Here at Future Climate Info we are passionate about helping home buyers and their conveyancers understand how our changing climate could impact on their property through our Environmental Reports.  We believe that widespread incentivisation of landowners for tree planting will make a significant impact on reducing flood risk and air pollution.

We will be playing a very active role in modelling how climate change is adapting these risks, as well as corporate support to contribute to accelerating tree planting across the country in a balanced way.