Climate change is pouring down

As the global climate undergoes rapid and unprecedented changes, the frequency and severity of flood events in the United Kingdom are due to increase. In the first two weeks of November 2019, the UK received a huge deluge of rain, which resulted in widespread river and surface water flooding. Subsequently, the Environment Agency (EA) issued 147 flood warnings and classed all but four rivers within England as having normal or higher flow for the time of year, with seven being classed as exceptionally high. This came after an extremely wet summer and start of autumn in northern, central and eastern England. These areas received an above average rainfall, with certain catchments receiving over double the average monthly total. This resulted in soils becoming saturated, rivers being higher and certain areas being on the brink of flooding, before heavy rain on 7th November tipped them to catastrophe.

Following the heavy rainfall on the 7th of November, flooding occurred across the Midlands, South Yorkshire and Derbyshire, as the rivers Don, Derwent, Rother and Ryton all burst their banks. South Yorkshire was one of the most affected and flooded areas. Sheffield received 8.4 cm (3.3 in) of rain before the River Don burst its banks. Areas of Sheffield, Rotherham and Doncaster flooded, leaving hundreds of people displaced and homes damaged. Meadowhall shopping centre opened its doors to flooded victims, as the streets and houses of Sheffield and Rotherham were becoming submerged. Sheffield had suffered from such a high amount of rain, the Met Office stated they had received a record 427.6mm of rain throughout the Autumn with 15 days still to go. This flood event displaced families, ruined homes and resulted in millions of pounds worth of damage across the UK. The scale and the impact of the flooding in November is terrible, however we are unable to fully understand the full impact until the EA has published its official reports.

It is estimated that nearly 2,000 properties across the UK were flooded, with thousands more households displaced and evacuated. Although the impact of the flooding has been severe, the Environment Agency have reported that an additional 14,400 properties were protected by flood defences during the heavy rain in the second week of November, including over 5,000 in South Yorkshire alone. This has forced the issue of flooding to the front page, consequently making it a serious topic discussed by every party in the run up to the general election. The Environment Agency worked tirelessly with emergency responders and local authorities to protect people and minimise the impact of the flooded areas within the UK. Throughout South Yorkshire, the EA had to utilise 38 pumps to remove 50 million litres per hour to protect homes and businesses. In Fishlake, a village in South Yorkshire, 1.25 million tonnes of water were pumped to reduced water levels from 2 metres to 30 centimetres, in just 24 hours.

Fishlake, became the focal point of this flooding crisis since the huge deluge caused the River Don to burst its banks, flooding the village. This forced over 700 people to leave their homes, many unable to return for several weeks. The army were deployed to help with the evacuation effort and the distribution of sandbags, in addition to assisting the Environment Agency with large-scale pumping operations. As Fishlake was one of the most severely hit areas, pictures of the flooded village could be found all over the news pages throughout November. These were often highlighting the dismay of the local community with images of local residents wading through flooded homes and streets. The Environment Agency and the government however, have received some criticism in their handling of this crisis. Residents in Fishlake were told by the Environment Agency, at 5pm on the 8th of November, that their homes would not flood and not to source sandbags. However, this appeared to be misjudged, as water flooded homes and streets of the village just a few hours later. Residents have been outraged with the lack of response and the handling of the flooding in Fishlake. The Environment Agency confirmed that Fishlake was hit by combination of flooding from the Don spilling into the local floodplain and surface water flooding. The interaction of a number of sources of water and the exact nature and timing of flooding in the area made impacts difficult to model and predict.

Unfortunately, measuring river flow rates and managing flood conditions are extremely difficult and challenging, especially when a large flood event is occurring. The Canal and River Trust (CRT) also received criticism after the River Ryton burst in banks in Worksop, Nottinghamshire on November 7th. Simon Greaves, the leader of Bassetlaw District Council, insisted the failure to open a sluice gate exacerbated flooding in the town, where people were rescued from chest-high water. A sluice gate is a form of barrier that slides into grooves set in waterways, which can control water levels and flow rates of rivers and canals. A dispute has occurred as the Canal and River Trust refused to open the gate, though eventually the gate was finally opened by a firefighter several hours later. The Canal and River Trust said that they were worried about the safety of the derelict building the sluice was in and added it would not have alleviated the flooding in the town, as they believed the water would have stayed in the area as the feeder canal and river ran in parallel, a very short distance apart. This is the second time residents and businesses of Worksop have experienced flooding in recent times, which has led to increased insurance premiums and some not having suitable insurance.

Groundsure provide a comprehensive flood risk assessment which pulls from numerous sources to give an interpreted flood risk assessment on all major flood sources. It additionally, provides a FloodScore™ which examines the fluvial (river), tidal, and pluvial (surface) flooding to the property, and gives a score which indicates the likely availability of affordable insurance. For Fishlake, the data within the Groundsure reports identified a high flood risk within the area before the devastating floods occurred. 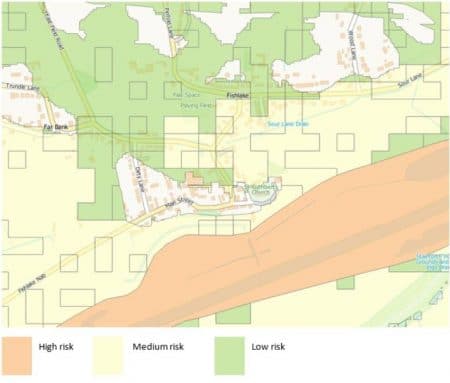 The data for Fishlake identified the area was at risk from river flooding (see above), in addition to a risk of groundwater flooding, surface water flooding and had experienced flooding in the past. 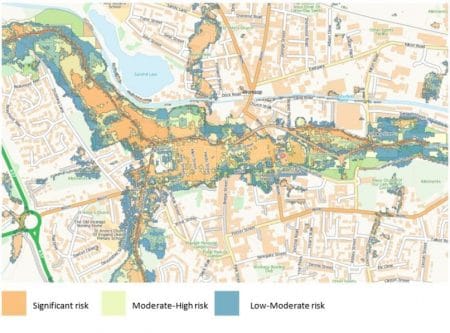 Flood events such as these appear to be happening at a higher frequency and with an increased intensity within the UK. This is due to climate change and the influence that we are having on our natural environment. Research suggests that the widespread flooding which occurred in the UK between 2013/2014 was attributed to human influence on the climate. This is similar to research exploring the 2015/2016 floods, which also established the link between human-induced warming and increased severity and frequency of flood events. Sir James Bevan, Chief Executive of the Environment Agency, said: “Climate change is likely to mean more frequent and intense flooding. Floods destroy – lives, livelihoods, and property, our flood defences reduce the risk of flooding, and our flood warnings help keep communities safe when it threatens. But we can never entirely eliminate the risk of flooding. Checking your flood risk is the first step to protecting yourself, your loved ones and your home”. Therefore, the importance of flood risk assessments will be paramount in understanding and informing homeowners and businesses of flood risk within the UK, in the future.

Before proceeding with any property transaction, a number of environmental risks including flooding should be investigated fully. In line with the Law Society Practice Note on Flood Risk, Groundsure’s reports provide a comprehensive assessment of risk, as well as giving a view on the likely availability of affordable insurance, via Ambiental Risk Analytics FloodScore™. As some insurers are currently using the small print in homeowner policies to avoid paying out in this catastrophic time, it is imperative anyone involved with property transactions fully investigates whether flood risk is included within the buildings insurance policy.

Groundsure reports highlight flood risks and can help you make the right decisions when completing property transactions. Check out our Flood and Avista reports for residential transactions, or our Review report for commercial transactions.