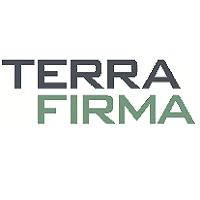 A major 40 m landslide occurred at Nefyn Bay in North Wales earlier this year sparking concern for nearby residents and business owners. The area is prone to regular small-scale cliff collapses due to the superficial deposits of clays and silts making up Nefyn Bay which are easily eroded by the sea. More concerning, however, are the nine large landslides have been reported within a few miles of this location since records began.

Properties in the Nefyn area have an estimated value range of between £350,000 and £450,000. Extreme weather events, such as intense rainfall, heatwaves, and flooding like those recently seen in the UK, will become more frequent as our climate changes. Research from Bank of England suggests that in a ‘No Additional Action’ scenario, global warming relative to pre-industrial times could reach 3.3°C by 2050, leading to warmer, wetter winters and hotter, drier summers.

Where ‘soft’ geology like that found at Nefyn exists, there is a clear relationship between increased rates of coastline retreat and climate change, and inevitably sudden landslide events will become more common. Another area prone to cliff collapse, frequently making news headlines is Birling Gap, East Sussex. Only a few days ago (1 August 2021) a large section of the soft porous white limestone cliffs collapsed, causing part of the coastal footpath to disappear. Rising global temperatures, sea-levels and an increase in storminess will result in greater erosion rates, which is already being experienced across the UK. 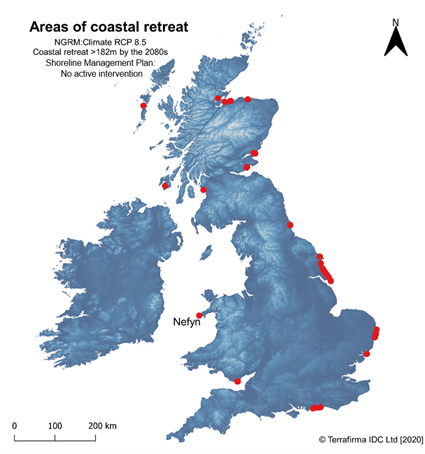 Coastal areas in Britain with expected erosion rate of over 180m by the 2080s (RCP 8.5) Image copyright TerrafirmaIDC.

Terrafirma’s coastal modelling identifies Nefyn as having one of the highest rates of coastal retreat in the UK. When conducting climate modelling, RCPs (Representative Concentration Pathways) are used which give best-case to worst-case emission scenarios. The best-case scenario – known as RCP 2.6 – projects a faster global effort to reduce emissions and adapt green energy and new technology, whereas the worst-case (RCP 8.5) projects an emissions pathway that tracks close to present day emission. If there is no active intervention of the coastline at Nefyn, this area could retreat as much as 250 m by the 2080s (RCP 8.5)

Terrafirma research has revealed other coastal areas across Britain with alarming coastal erosion implications by the 2080s assuming no active intervention (Image 1). In Scotland, Barry Sands is projected to recede by a staggering 750 m. Along the east coast of England, Covehithe in Suffolk and Withernsea, Yorkshire could see between 400-500 m of land lost to the sea. These projections mean that communities and businesses in these regions face real challenges as we move through the 21st Century, and they will not be the only ones to deal with such unprecedented coastal change.

Almost 4,000 properties are currently considered to be at substantial risk from coastal erosion across England, Wales and Scotland. NGRM: Climate analysis reveals that by the end of the century this figure is expected to rise to around 23,000 properties (RCP 8.5).

Terrafirma’s geologists, engineers and scientists have applied advanced modelling, extensive research, and in-house expertise in order to offer property professionals and prospective homeowners the first property-specific assessment and expert interpretation of the risk from coastal hazards.

The Ground Report includes award-winning assessment and answers key questions on the risk to property and land from coastal erosion, flooding and sea-level rise. The report also considers sea defenses, Shoreline Management Plans, and the impact of climate change.

This means that you don’t have to be a climate scientist, geologist or engineer to understand your clients’ changing exposure to complex ground risks. Terrafirma can provide the technology, expertise and support to identify exposures and implement informed solutions.

The webinar will cover: coastal hazards – flooding, erosion and landslides all can have devastating effects on property and land. In this 30 minute, fun and interactive session, Geologist Maura Partridge will explore risks to property and land from coastal hazards, how these processes shape our coastline, and the impact of climate change. Maura will also include key information on shoreline management plans and coastal retreat which is included in the Coastal Hazard risk assessment within the Ground Report. After the session there will also be a 10 minute Q&A opportunity.