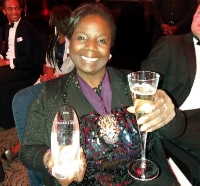 Millicent Grant, President of the Chartered Institute of Legal Executives (CILEx), has been acknowledged with Black Solicitors Network (BSN) Lawyer of the Year at the UK Diversity Legal Awards ceremony.

The UK Diversity Legal Awards, which took place on Tuesday, 28 November at the Grange St. Paul’s Hotel in London, celebrated Millicent’s leadership, and the contribution she has made towards BAME diversity by presenting her with the prestigious (BSN) Lawyer of the Year Award. The Awards, now in its 8th year, are the only industry awards which focus solely on recognising and promoting equality, diversity and inclusion across the legal profession.

Upon receiving the award Millicent, said: “I’m more than pleased to have received this award, given the contribution made to diversity in the legal profession by the other finalists in this category of the UK Diversity Legal Awards. One of the ambitions for my year as President of the Chartered Institute of Legal Executives is “Progression in the Profession”. I believe it is good to lead by example and hope that CILEx members will be inspired, and given confidence by my receipt of this award – “BSN Lawyer of the Year 2017”. I hope it will demonstrate to current and potential members that they can pursue their ambitions as a lawyer in the legal profession with a qualification as a Chartered Legal Executive.”

Judges for the awards, said: “Millicent is known among her peers for enabling people from diverse backgrounds who would not otherwise be able to become lawyers to access the legal profession.

She has and continues to champion initiatives and supports this aim and recently addressed the House of Lords on diversity within the judiciary.

Millicent also engages in voluntary work to share the benefit of her skills and experience as giving back to society to encourage, support and inspire others. A particular example is her long-standing involvement with Knights Youth Centre, South London an independent youth working charity of which this person is also now chair on its board of directors.

A significant and motivational individual becoming the 54th President of CILEx.”