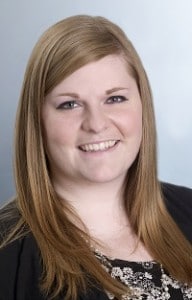 A specialist public lawyer at national law firm Irwin Mitchell is celebrating after being named ‘newly qualified lawyer of the year’ by the Cambridge & District Law Society (CDLS).

Caroline Barrett received the award and a £100 prize at a black tie event held at the city’s Robinson College on Friday 27 March.

Awarded for demonstrating excellence at the starting point of a legal career, Caroline was nominated for the prize due to her work on human rights, community care and mental capacity at Irwin Mitchell’s Cambridge office.

She has already been involved in several major successes for the law firm’s public law team, including work on a landmark Supreme Court ruling on the consultation duties of public bodies and a case in which she secured damages for a pensioner who was unlawfully deprived of his liberty.

Caroline Barrett, who joined Irwin Mitchell in 2011 as a trainee solicitor and qualified into the firm’s public law department in 2013, said: “I am thrilled to have received this award and be recognised by my peers in Cambridge’s well regarded legal community.

“The new Irwin Mitchell office only opened in Cambridge last year, so it is great to be recognised by the local Law Society at this early stage.”

Neil Whiteley, regional managing partner of Irwin Mitchell’s Cambridge office, added: “Caroline is an absolute credit to our office and to the Public Law team as a whole, undertaking incredibly important work on behalf of vulnerable adults and their families whose voices need to be heard. She is building a strong reputation in protecting people’s rights in the region.

“We are delighted that she has been given the credit and recognition that her excellent work since qualification deserves and I believe that this award marks the beginning of a long and rewarding career in law.”