Conveyancing activity in Q2 followed a rollercoaster journey with transactions jumping by almost a quarter (24%) year-on-year – up from 230,430 to 286,425 – as completions were registered following the rush to beat the Stamp Duty Land Tax (SDLT) changes for buy-to-let properties and second homes on 1 April 2016, according to the latest edition of the Conveyancing Market Tracker from Search Acumen, the search provider.

Completions recorded in the second quarter of 2016 were 30% higher than two years ago in Q2 2014 and 59% higher than three years previously in Q2 2013. Compared with Q1 2016 –  the three months preceding the SDLT reform – the second quarter saw a 4% higher volume of completions recorded as conveyancers dealt with the reverberations across the housing market  and the rush of transactions were logged as completed by Land Registry.

The Tracker – which uses Land Registry data to examine competitive pressures in the conveyancing market – shows the top five firms led the way in terms of growth compared to the rest of the market, with completed activity rising 17% over the quarter and 41% over the year to reach an average of 3,523 transactions per firm over the three month period. 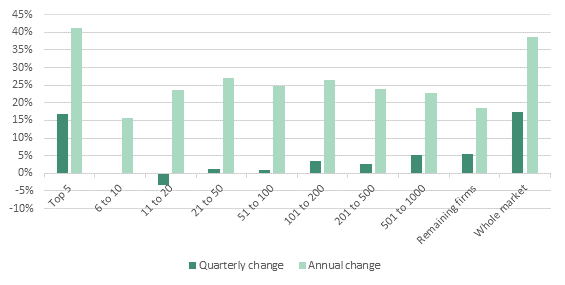 A combination of the SDLT aftershock and pre-Brexit activity meant that conveyancers experienced a rollercoaster ride from month to month during Q2.  April saw the largest number of businesses responsible for completed transactions at Land Registry in any month since September 2014. The total of 4,374 was 4% higher than a year earlier, when 4,201 firms were active, and suggests the stamp duty rush brought more occasional players back to the market.

Volumes of completed conveyancing transactions were also at their highest in April since monthly records began five years earlier in April 2011. Over the month, activity jumped 26% to 114,425 in April from 90,476 in March.

Despite an inevitable slowdown the following month, both May and June also saw year-on-year rises of 14% with firms completing 81,583 and 90,477 transactions respectively, as activity picked up again despite the uncertainty ahead of the UK’s referendum on its EU membership.

“Few sectors have been left untouched by the tumultuous events of the past few months, and the impact of the EU referendum on the political and economic landscape. Our analysis shows the conveyancing industry has been tried and tested in recent months, and the pressure shows no sign of easing as our country begins to work out what comes next.

“The Q2 data confirms the rollercoaster quarter that many forecasted, with the residual effect of April’s stamp duty changes causing the highest level of completed activity the industry has seen since 2014. Since then, the Brexit outcome has painted an uncertain picture for the future of the property market.

“The lull in completed activity during May can be attributed to soaring transaction numbers in previous months, as investors sought to avoid the higher SDLT charges. The looming EU referendum may also have begun to make buyers, tenants and investors alike a little nervous. Conveyancers were not immune, and the rise in market share and an increasing number of transactions for larger firms will put the pressure on the middle market and challenger firms to compete in a growing market.

“Despite the year on year rise in total transactions, the fall of 6% in first registrations since Q2 2015 suggests there may be a bigger underlying problem in the housebuilding sector. While the Bank of England rate cut will do its bit to reignite the appeal of home buying, house builders must increase output in order to hit the government’s one million homes target.

“With stability will come confidence, and as our political and economic future becomes more certain, the next few months look more positive as provisions are put in place for a more stable Q3.”