Brain injury victim: Counselling was key to my recovery 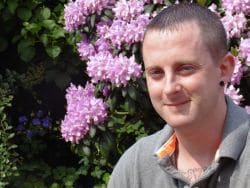 A man who came close to death after suffering a serious brain injury following a fall at work has told how counselling was key to his recovery and rebuilding his life.

Scaffolder Matthew Burke, 30, of Hull, went from being a fit and healthy footballer to the brink of death when falling just five feet off a step-ladder at work two years ago.

Having suffered bleeding on the brain after hitting his head direct on a concrete floor, he was knocked unconscious, left unable to walk, scarred for life, and facing a battle for survival.

Despite a five hour operation and doctors warning he was much more likely to die than survive, it was a battle he won, and he was out of hospital in just over month.

However, it was then that Matthew discovered his battle had only just started, as he had to learn to walk again, was left without a job and unable to socialise, and found himself living largely in isolation.

In his own words, he faced ‘some dark days’.

With the help of personal injury and medical negligence specialists Neil Hudgell Solicitors, Matthew crucially had access to the vital counselling he needed to help him come to terms with the huge change in his life.

And, on the back of Headway last week warning the Government that it faces a ticking time bomb by reducing brain injury survivors’ access to support and rehabilitation services, Matthew has stressed the hugely important role it played for him.

“I had great counselling support and it was absolutely crucial to my recovery,” said Matthew.

“There were some dark days where I felt down, and I admit that I felt isolated. It was the counselling that helped lift my spirits, kept me positive and gave me some focus to where I was heading. I was calmer and more relaxed, and focussed on the end goal.”

“From being a fit and healthy young man I went to being at death’s door in a matter of seconds, and that really brought it home to me how fragile life can be,” he said.

Matthew gave particular praise to Jane Woodcock, senior legal executive in personal injury at Neil Hudgell Solicitors who deal with numerous complex brain injury claims, for the role she played in helping him rebuild his life.

Having secured a six-figure settlement to compensate for his injury, loss of earnings and being prejudiced in the jobs market going forward, Matthew is now using the money to buy his own house, and has recently found employment as a care support worker.

“Jane Woodcock was amazing. She kept me focused and positive at all times, and if ever the counselling team needed a nudge, she was there making sure I had all the support I needed,” he said.

“Jane was someone I felt able to talk to as she seemed to understand my situation and the difficulties I faced.  She advised me that the compensation I secured was money to help me rebuild my life. I have kept that in mind and that is what I am using it for.

“I have managed to find positivity, I am back active, and I have my work and social life back. I am really enjoying life again, and I have been able to put it all behind me.”