In the 19th century, London grew at an unprecedented speed and was transformed into the world’s largest city and the capital of the British Empire. Between the smog and squalor, a foul-smelling substance was first identified on the sites of old gasworks and coke works. Up until the 1970s coal gas production provided the rapidly expanding markets for heating, lighting, and raw chemical products for manufacturing processes. These processes produced a vivid blue substance which smelled rancid, and unlike other waste products like tar and liquor, it could not be sold. This made it problematic to dispose of and infamous to early engineers and workers throughout London and the developing industrial world. It was named Blue Billy because of its Prussian blue colour. This distinct blue colouring would soon become synonymous with, and a visual sign of, land contamination. Early complaints were regarding its putrid smell, as it was typically dumped in water courses or available land nearby. Little did people know that they were polluting and certainly coursing health implications, the full extent of which would not be understood until many years later. 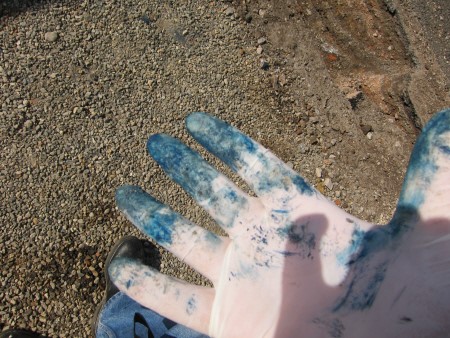 Blue Billy is a chemical or mineral deposit often encountered in contaminated land to this day. It is associated with coal gasification and is common in gas works and coke works throughout the UK. Hundreds of gas works and coke works existed within the UK throughout the UK in the 19th and 20th century, which produced a range of liquids such as tar, ammoniacal liquors and crude benzol. This process created spent oxides, which when contains cyanide forms Blue Billy. These were produced in the later stages of gas production and typically dumped near the gas works in any available land or in nearby water courses. Blue Billy’s vivid colour is a form of Prussian blue, which is a dark blue pigment that are composed of complex iron cyanides. The oxidation of iron produces positively charged iron ions, and the blue colour is due to absorption of light of appropriate wavelength necessary for electron transfer between iron ions. It is now a common indicator of contamination, and carries its own health risks and complex methods of remediation.

Blue Billy contains high levels of cyanide and ammonia compounds and if untreated it can lead to chronic (i.e. long-term) risk to health if ingested. Blue Billy can contain free cyanide which is acutely toxic to humans which can result in death if a small amount, such as a few grams, is ingested. Typically, however, acute toxic effects of Blue Billy include loss of consciousness and breathing difficulties, as it can limit the absorption of oxygen at the cellular level. There are numerous examples of Blue Billy contamination stopping or scaring communities. In 2009, two streets in the Black Country were under investigation as the homes were built on a former gas works where Blue Billy was found to be present. The residents have had to live in these homes ever since the Stonegate Housing estate was determined as Contaminated Land under Part 2A of the Environmental Protection Act 1990, a remediation notice was given and now residents are in the process of claiming against the council as property prices have plummeted. A similar story took place in Prestatyn. When Blue Billy was found on site it led to the development putting down tools and local residents complaining about the “poisonous smell” which was supposed to be like tar or heavy diesel fumes. 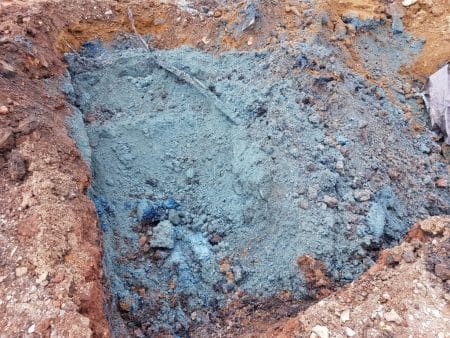 Blue Billy identified on a development site in Tonbu, Bridgend. Picture from envirotreat.com

Finding Blue Billy on site however isn’t a complete catastrophe as there are a number of different methods of remediation depending on the level of contamination. Opinions vary to what extent Blue Billy can be remediated other than extraction and removal to a landfill. Typically, the process can involve removing the worst of the material and bio-remediating the rest. This process uses the activity of bacteria naturally present in soil to break down contaminants. The bioremediation process can occur on its own or it can be accelerated up by creating the right conditions, such as by aeration, heating or the addition of organic materials to the contaminated soils.

A range of Groundsure’s reports contain a comprehensive contaminated land assessment utilising the most comprehensive data available including Groundsure’s Historical Land Use Database, environmental permits, active and historic landfill and waste sites and current industrial sites. This would identify potential sources of contamination, which could lead to pollutants such as Blue Billy, before any development would take place.