Animals and contamination: A long, polluting foot (or hoof) print

Leather has a great importance in cultural practices around the globe. Since prehistoric times, it has been used to create clothing as well as impenetrable armour. Today, it is part of everyday attire and traditions.

But processes around leather and animal carcass management have used some heavy duty chemicals. They are also at risk of exposure to serious infections like anthrax and land contamination. We examine this legacy which can be found on street names and picked up on historic land use maps as part of environmental risk assessment.

Before the industrial revolution, tanning was a local, village tradition. Tanneries were set up in many reasonably sized settlements close to water sources and trade routes.

Ahead of modern mechanisation, the tanning process was dull, strenuous and often repulsive work. To ensure the rawhides were durable and less susceptible to decomposition, the craft of tanner was developed. They produced attractive end products but it came with a highly contaminative process.

Firstly, the animal skins were cleaned and softened with water. They were then pounded to remove excess fat and flesh from the hides. The hides were coated with an alkaline lime mixture, and left to putrefy for months. Alternatively, they would go through a process known as scudding – soaked in vats of urine before removal with a dull knife.

Later stages involved working animal brains or dung into the skins. This encouraged fermentation and made them supple. After that, the skins were ready for tanning and would be soaked in a mix of solutions, before the drying stage.

As the pace of modernisation accelerated, so did the use of chemicals to accelerate the stripping and hide preparation process.

The two main types of tanning are chrome tanning and vegetable tanning. Chrome tanning makes up a large majority of the industry. Chromium compounds are applied to protect hides from decay and to make them more durable against moisture and aging. Chromium interacts with fibres in the raw hide during a bathing process, after which the tanned hides are wrung and prepared for finishing. Other materials that may be used in the pre-treatment and tanning processes include sulfuric acid, sodium chlorate, limestone, and limestone soda ash.

Due to the repeated processes of soaking raw hides and wringing them out, the tanning process creates large amounts of wastewater that may be contaminated with many different chemicals.

Because of the wide variety in the chemicals used during the tanning process, wastewater from this industry can have very different chemical make-ups.

These include biocides, surfactants, organic solvents and inorganic substances such as toxic chromium (III) salts. Their application is, however, necessary for the correct preparation of the material for manufacturing of leather goods.

A full list of 100 plus such chemicals and their stage of use can be found here.

Historically, potentially toxic wastewater and solid waste that contained chromium from hide scraps, skins, and excess fat may have leached into nearby soil and water. This could have placed nearby residents at risk of contamination. 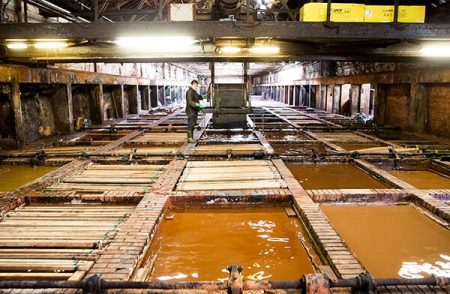 Additionally, the hides may have been affected by Anthrax. This is an acute disease caused by the bacterium Bacillus anthracis, and is spread by spores, which infected animal carcasses can be a source of. When the hides were stripped, the highly contagious spores could have lingered in the soil for decades.

During the 1960s, several farms along the Biss Brook near Westbury, Wiltshire had confirmed anthrax cases, associated with the contamination of the brook with waste drainage from the nearby tannery.

The tannery had imported some infected hides that were later buried on the premises, and the brook had been cleared in 1963. A dairy farm near Westbury reported at least four suspect cases – all of which were buried on site. The tannery, which had been in operation since the 1890s, finally closed in the 1970s.

In 1996, anthrax reappeared at this farm with three carcasses reported as suspects, although only two were confirmed. This time the carcasses were incinerated on site, rather than being buried.

This incident was associated with a number of possible sources. These included soil disturbance of the northern bank of the brook, historical burials, irrigation and digging activity in the area of the tannery due to the construction of a new housing estate. Because of the tannery, it was felt that incineration was the only solution.

Former large scale burial sites for cattle due to Anthrax infection are still an issue today.

In Forfar, Scotland a proposed development of 175 homes by Muir Homes, has received multiple objections due to fears it could create an anthrax outbreak.

Livestock carcasses suspected of being infected with anthrax were buried at Westfield Farm in the late 1940s/early 1950s. The burial pit is located within the development site.  Local residents, some of whom remember the cull, fear a “very real danger to human life” from the possible disturbance of an anthrax spores. These can remain locked and active in the soil for many decades afterwards.

Muir Homes have counteracted fears by stating soil sampling in the area was sent for expert analysis to identify potential risks, and anthrax was not detected. Furthermore, they said they would not undertake any excavations within 30m of the known area of mature trees that indicate the area of anthrax ash burial.

However, protesters continue to express “significant concern” over what has been described as the “inadequate” 30-metre exclusion area between the proposed new houses and the known area of burial remains. Any disturbance may mean existing residential and commercial properties downwind from the site could be affected.

Today, any infected carcasses are disposed of on site by the local authority using a mobile incinerator. This is a lengthy and laborious process that can take 36 to 48 hours for each carcass. The potentially contaminated soil where the carcasses were found is also incinerated.

The ashes from the incineration are still considered hazardous given the presence of spores. They have to be further disposed of at a licenced location that handles hazardous materials, such as at Porton Down in Wiltshire.

When former tannery sites are redeveloped, there is a legal requirement for such developments to consider the possibility of anthrax contamination.  Samples must be taken during site investigation stage to look for anthrax spores.  It is, however, interesting that there is no evidence yet of any worker or member of the public being infected with anthrax as a result of the development of brownfield sites.

It is also important to stress that today’s UK tannery industry operates under environmental permits with strict pollution controls and waste management practices. These seek to protect local populations from any potential health risk or nuisance.

The UK developed environmental legislation over many years, initially reacting to various problems as and when they were recognised, and eventually introduced one of the first systems of Integrated Pollution Control for contaminative activities including tanneries in Part 1 of the Environmental Protection Act 1990.

Addressing the impact of legacy contamination from our various polluting activities was the intention of Part 2A of the Environmental Protection Act 1990.  Its implementation in April 2000 led to the appointment of Contaminated Land Officers within local authorities across the country, who as part of their remit would also consider planning applications to identify the need for investigation and remediation as part of the redevelopment process.

Before its full implementation from 2000, therefore, there could be examples of sites that were not afforded the same protections as a new housing development would be today.

Assessing Risk: Check the Age of the development.

So, street names and historic land use maps can provide clues to the past. When a housing estate was developed on former tannery land – up to and including the 1990s for example – is also an important consideration.

As a conveyancer, it is important that you can advise your client on whether their dream house in Tanners Mead, Tanners Yard, or Tanhouse Lane could have a potentially contaminative past.

FCI’s Historic Land Use Dataset includes leather tanning & dressing and highlights these as a high risk use in the report. The age of the development is also a key determinant in how our consultants adapt the risk profile.

Future Climate Info’s environmental reports provide a comprehensive, yet concise and clear assessment of site history, potential for contamination and, as a result, follow-on options for more detailed testing or insurance provision.

For more information contact us on 01732 755180 or email info@futureclimateinfo.com