Cars should be banned from idling near schools and congestion charges imposed across the UK as part of measures recommended by Public Health England (PHE) to stop the 36,000 people dying each year from human-made air pollution.

They are calling on councils to introduce no-idling zones outside schools and hospitals; the imposition of more congestion charges and low emission zones; and the development of a vehicle-charging infrastructure to promote a “step-change” in the uptake of electric cars.

The review stops short of suggesting banning cars from the school run. However, there is a strong political consensus about the need right now to stop idling outside schools.

In a very recent peer reviewed study from the Environment Journal by scientists at the University of Basel Children’s Hospital, they found that in the whole cohort of 304, increased air pollution levels from birth were associated with reduced lung function at six years.

Within this, 52 children that were exposed to NO2 levels from the highest quartile during pregnancy, had a significant decrease in forced expiratory volume (FEV1) in the first and second years of life and from birth.

The results suggest that exposure to higher NO2 levels, especially during the sensitive period of early lung development, may be associated with reduced lung function at school-age and underline the importance of pollution reduction measures.

They conclude there is sufficient evidence that impaired early life lung functional growth is associated with later respiratory morbidity in the elderly. Even at low concentrations, it will affect a large proportion of the normal healthy population and will potentially have a significant impact on public health in the future.

Children can breathe in up to three times more air relative to their weight, meaning they take in a greater volume of toxic air which can stunt lung growth and increase their risk of respiratory disease.

The RAC says idling engines produce levels of CO2, NO2 and PM2.5 over two times as many as those in motion, with most instances coming from ‘avoidable’ road situations such as waiting to pick someone up outside a workplace or school.

The latter situation is of particular alarm as They quote research showing that 23% of all car journeys are two miles or under, so have run an awareness campaign with schools to  consider whether parents really need to drive, cutting out just a few of these types of car journeys will make a real difference. 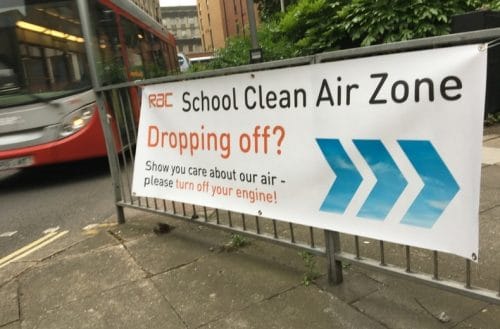 Eastbourne Borough Council is one of the latest Local Authority to launch an anti-idling campaign. Schools across Eastbourne are being invited to sign up to the campaign and those that do will receive digital information packs to send out to parents and pupils giving them the opportunity to find out more about air pollution and ways to reduce it. 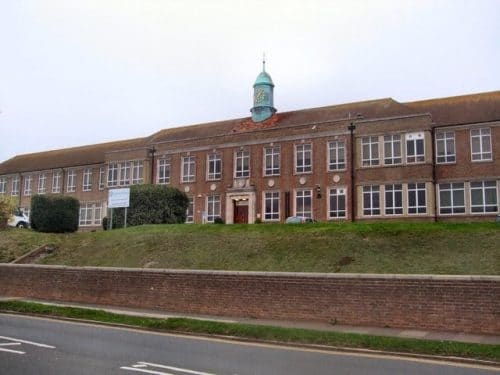 Cavendish School, who is the first school to sign up to the campaign

The first school to sign up to the council campaign is Cavendish School.

Headteacher Peter Marchant said: ‘This is a great initiative and we hope everyone takes notice of what is being said. Leaving an engine running while waiting in the car is an unnecessary source of air pollution, and combating this outside schools is especially important because there are potentially a high number of idling vehicle engines here at drop-off and pick-up times.’

28 ‘innovative’ Local Authority projects have also been announced that will share £3m in the latest round of funding from the Government’s Air Quality Grant. This year funding has also been awarded to trial new technology to test the effectiveness of low-cost sensors to better understand the air quality data they produce.

Dudley MBC have purchased multiple Zephyr air quality sensors from FCI’s data partner, Earthsense, in a bid to find out just how polluted the air is around a number of the local schools. Northfield Road Primary school is located just a short distance from Halesowen Road which has recently been identified by a ‘Friends of the Earth’ report as one of the highest polluted areas in the UK.

Removing Cars from the School Run

The positive impact on air quality of reducing school run traffic was clearly demonstrated on the BBC’s recent Fighting for Air programme.  Again in Birmingham at Kings Heath, EarthSense were asked to design and implement the pollution monitoring system. They deployed their Zephyr sensors, with measures taken for 3 days before and then on the day when parents were asked to bring their children to school on foot. 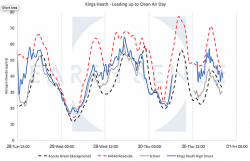 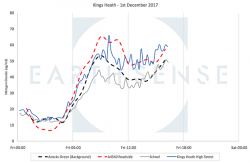 On the test day, the general levels of pollution across the City were higher than average, being the first shopping day of December. However, concentrations around the school were notably lower, with an average of 15% less NO2 from 5am to 1pm. As the school had been measuring 5% above the background pollution from DEFRA AURN readings, this was declared as a 20% reduction.

This means that community groups can see the direct impact of any intervention they undertake, providing evidence to support ongoing activity and community buy in.

But it seems that while community led initiatives like the one in Kings Heath can show immediate positive effects, Councils seem slow to step up and implement fines for idling. A recent Air Quality News investigation revealed that, of the five councils who have been actively fining motorists for idling, only a handful have been issued.  Air quality campaigners have called the current system of enforcement ‘not fit for purpose’.

But we have to change our behaviour, for our children’s sake.

Technologies are now available whether through real time air quality monitoring triggering bans on specific vehicles on certain days – or penalising them through low emission zone fines, such as London’s ULEZ coming in this month – as well as over time the transition to greener transport and mass adoption of electric or autonomous vehicles.

But this will need to be at the cost of widespread chargeable infrastructure (such as in lampposts or bollards) and the increased renewable power generation – none of which are overnight solutions.

So, in the short term it will have to be more stick than carrot to change behaviours – and the school run should be an easier win.

Put it this way – If we were having a conversation about 30,000 people dying each year because of a polluted water supply, it would be a very different conversation, wouldn’t it?

Could you be affected?

Understanding the levels of air pollution where you live or where you plan to move to is essential, especially if you have a young family or are planning to start one.

Earthsense’s unique national MappAir data is now available in Future Climate Info’s Premium Environmental Report. It provides a vital indicator of air quality in the vicinity of the home and is essential reading for anyone thinking of moving home.