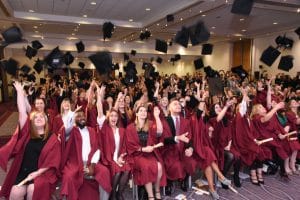 The graduates celebrating their achievements

Some 101 new Chartered Legal Executive lawyers swore an oath to mark their qualification at the annual graduation ceremony held by the Chartered Institute of Legal Executives [2] (CILEx) on Saturday.

They were joined by a further 175 members, who were recognised for becoming Graduates – the step before becoming a full Chartered Legal Executive lawyer for those who have completed the academic requirements of the qualification.

The Chartered Legal Executive lawyers are now Fellows of CILEx and entitled to use the designatory letters FCILEx. The Graduates can put GCILEx after their names.

At the event in Milton Keynes, they were all praised for their achievement and urged to make a difference by CILEx President Philip Sherwood, as well as by guest speakers Ed Buckley, Shantha David and Dana Denis-Smith.

Chartered Legal Executive lawyers are the first and only legal professionals to swear an oath on qualification.

On Saturday, the 101 recited: “I promise to discharge diligently my duties and responsibilities as a Chartered Legal Executive. I will protect my independence as a lawyer, uphold the rule of law, and act at all times with integrity. I will justify the confidence and trust that is placed in me by my clients, the courts, the public and by my profession.”

Philip Sherwood told the new graduates: “You are ascending in a profession in a time of great challenge. There is no area of our justice system that is not in flux or under pressure, and no area of law that is standing still.

“The legal profession as a whole is richer and more representative because people like you are entering it: with your broad range of backgrounds, with your different life experiences, those of you taking on a new second career.”

Ed Buckley was hit by a speeding taxi while a student, which left him in a coma for six months. His injuries were initially so severe that it was not certain he would recover. He spent almost two years in hospital and has since made an impressive recovery.

He has since returned to university and also taken part in the Superhero Series triathlon for the Irwin Mitchell team, the law firm which acted for him.

Ed Buckley said: “You are entering a profession where you can really make a difference.

“As lawyers you deal with people at times of great change and challenge. They are often vulnerable, needy, confused people, and as well as your obvious legal expertise you need to be kind, thoughtful, understanding and compassionate.

“You have the chance to do good. You have the chance to be that thoughtful and compassionate lawyer who helps people like me as they enter the next chapter of their lives, leave a legacy behind for others, or just need a little guidance and support. Whether as a lawyer, or as a judge, please go out there and do good.”

Shantha David is an in-house lawyer at the union Unison, who led on its landmark Supreme Court challenge last year to the government’s introduction of fees for employment tribunal claims.

She told the audience: “So, what next? That’s down to you. You can make of it what you want. Don’t let people’s perceptions or your own limitations of what you think you are capable of achieving stop you.

Dana Denis-Smith is both CEO of Obelisk Support and the founder of First 100 Years, a project that, next year, will mark the centenary of women entering the legal profession.

She said: “Almost 100 years on from when women first entered the legal profession, Chartered Legal Executive lawyers have been the biggest beneficiary, with three-quarters being women.

“Becoming a CILEx lawyer is a great achievement. You have to sacrifice a lot, work around other jobs, be looked down on sometimes, and yet still really believe in yourselves. You should feel proud.”